Kymberlie ~ WriterOfTheStorm.com
Kymberlie Ingalls is native to the Bay Area in California. She is a pioneer in blogging, having self-published online since 1997. Her style is loose, experimental, and a journey in stream of consciousness. Works include personal essay, prose, short fictional stories, and a memoir in progress. Thank you for taking a moment of your time to visit. Beware of the occasional falling opinions. For editing services: http://www.rainfallpress.com/ 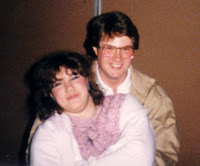 My crush on KKIS, and Rick, lasted much longer than the one with Joe.  By school year’s end, we were over.  We didn’t stay lost in love, but at the time, the sadness seemed to go on forever.
‘Til the next infatuation came along, anyway.
“Now I’m lost in love, but I don’t know much.  Was I thinking aloud, and fell out of touch?  But I’m back on my feet…”
© Kymberlie Ingalls,
Lyrics:  “Lost In Love” – Air Supply
Posted by Kymberlie ~ WriterOfTheStorm.com at 1:58 AM